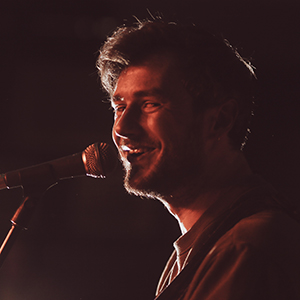 Patrick is an Irish multi-instrumentalist, singer, performer and writer from Bangor, Northern Ireland, with 10 years experience playing gigs to thousands of people all over the world. From Belfast to Berlin to London to Croatia to Dublin and many more. His eclectic mix of songs ranging from popular modern songs, to those forgotten pop bangers of the 60s through to the early 2000s, to his favourite well known and lesser well known traditional Irish songs.

He is a singer, a songwriter and performer at heart, with most of his time spent playing anywhere from 4 to 10 gigs every week. From 2017 to 2022 Patrick has had resident gigs in and Irish bar called The Points in Newcastle Upon Tyne every Friday and Saturday night, playing to at least 200 people, many of which are regular attendees and city breakers ready for a boogie and a sing along into the early hours of the morning. Patricks perception of reading the crowd and playing to what the crowd want not just what he wants, is a skill which sets him apart from others who may be more self indulgent in their performances.

You will not only be entertained by Patrick and want to sing along and dance around from his charismatic performance and choice of songs, but will made made to feel like a friend and a valued punter no matter who you are.