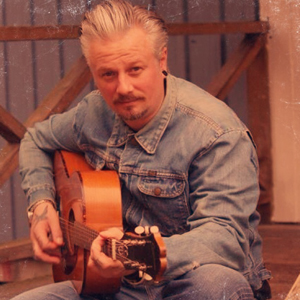 Darren Cash is a stockholm based musician from the English midlands. He has been a touring musician for 30 years, signed 3 major record deals with MCA, London Records and island records. Bands and releases he has recorded  with over that time have charted 1 top 40 single, 4 top 20 singles and 1 top 10 single plus 1 gold selling album.

Now touring mostly as a solo entertainer but also with his band The Lazy Stars he is enjoying acclaim touring the United States, Scandinavia and Britain. In the last 5 years recordings at the legendary Sun Studios memphis and the spotify sessions have received great reviews on both side of the atlantic.

Darren has honed the craft as a solo entertainer portraying the roll as a true Rock n Roller., covering the evergreens of the past to the modern day classics. He takes the stage by command and delivers the Johnny Cash and Rock'n'Roll standards with integratiy. Always a good night at a Darren Cash concert.