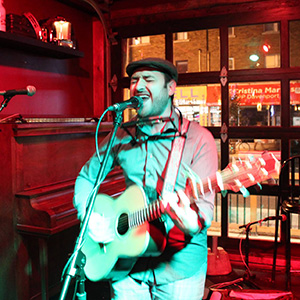 Adam Sherry originally hails from Dublin, Ireland but has been travelling and performing music across 4 continents over the past 10 years. Self-described as a whiskey drinkin', guitar playin', harmonica blowin', cigar smokin', travellin man', Adam is a high energy performer that likes to get a party started and may serenade you with some of his tales from the road. He can play a lengthy set of cover songs from artists such as The Rolling Stones, Bob Dylan, Bruce Springsteen, CCR and many many more. He is also a songwriter and re-arranger of older songs. His album Ramblin' Around can be found on Spotify and all other music streaming platforms. One thing is for sure, whenever Adam Sherry is performing, you are jumping around or singing along to classics such as Piano Man or American Pie. A great night of top notch live music is guaranteed.