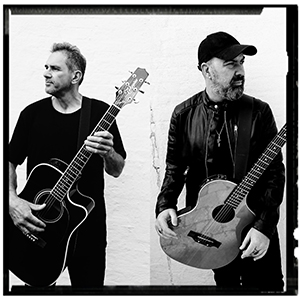 It began as a fairly new concept at the time since there were very many bands performing in the area, but actual acoustic music was
fairly new amongst the local music scene.

The Troublemakers quickly established themselves, playing various venues both local and further out in Athens city. In the summer of 1997,
the duet had a chance to perform for a full summer season in Rodos Island for the Swedish Bar Modesty.