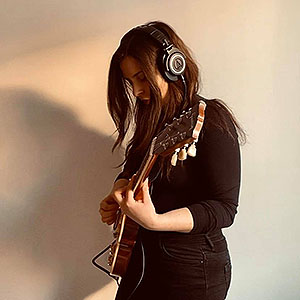 Sabrina is a singer-songwriter and guitarist. Her career started early. At 14 years old she had her first concert in front of over 200 people and from there on she never stopped doing music. Sabrina has performed in England, Denmark and Transylvania. At the moment she is touring around Denmark, performing in different pubs, restaurants and at private events, but also producing her own music. Sab’s own music is mostly electronic, indie and alternative, while her covers range from Blues to Pop, Funk, Jazz, Rock, Disco and others. She released 2 singles in 2020 called ‘Stuck’ and  ‘Diffused’ and will soon release many more.