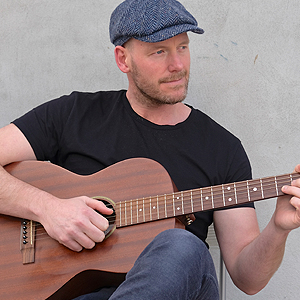 Nick Adams is an English musician and entertainer with over 20 years experience playing stages all across the UK and Europe. Originally from the city of Bristol, Nick has dedicated his life to music after having been influenced by the sounds of bands like The Beatles and The Rolling Stones echoing through his childhood home, igniting his curiosity and love for all things Rock n roll.

An unstoppable passion ensued and thrived through Adams’s teens and on in to adulthood where playing guitar and singing would become his focus.

Through his early 20`s Nick would begin to shape his talent as a rock singer by fronting a number of local garage rock/grunge bands playing in pubs and working mens clubs in his home town and throughout the south west of England. After a few years experience and filled with the desire to travel and explore distant shores, Nick said farewell to the UK and with his guitar in hand, headed south in search of the sun and adventure.

This musical pilgrimage led Nick to the island of Tenerife where he and his newly formed band landed their first full time residency gig at Fitzpatrick's Irish house, a renowned live music venue in the heart of the tourist area of Las Americas. Here the lads would play six, sometimes seven nights a week entertaining tourists from all over the world and gaining a strong local following. It was during this long and demanding residency that Nick would master his craft by belting out rock and pop classics to a hungry crowd night after night.

After 5 years and with more than 1500 performances under his belt, it was time for a change of scene and so Nick pulled up the stakes once again in search of a fresh challenge and new opportunities.

Nick would finally find his way to Denmark and for the last 10 years he has been busy touring Scandinavia as a solo troubadour, delivering his energetic acoustic shows with style and passion. With good banter and a cheeky smile, Nick bombards audiences with a variety of toe taping, dance floor filling hits from the 60’s and 70’s right through to modern day rock and pop, using his extensive repertoire to get any party started. An evening with Nick and his trusty guitar is not to be missed and a stunning and professional performance is guaranteed each and ever time.