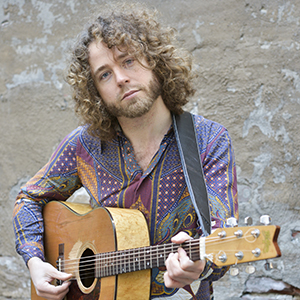 Ryan Tompion may look like he's just arrived via time machine straight from the 1970's, but he brings an entire century's worth of musical repertoire with him. When the crowd is up on their feet, he gives them anything from Lady Gaga, Daft Punk, ABBA or Mumford & Sons. When they're still warming up, he pulls out some Pop and Rock classics to get them singing along. And when there are special requests, satisfaction is guaranteed with this musician's wide range of musical influences from 1920s Blues, to 1950/60s Rock'n'Roll, 70s Rock and Disco, to more modern Pop, Dance and party music and suitcases full of Irish folk songs.

A truly unique setup lets Ryan Tompion create as much sound as one person can possibly make. Who said men can't multitask? The two lowest guitar strings double as a bass, there's a stomp box under one foot for a driving beat and a tambourine on the other foot. For some songs, the melody is doubled on the harmonica and virtuoso finger-picking passages make the guitar sound like an entire army of guitars. When Ryan Tompion gets going, it truly is a full-body workout!

Ryan Tompion wants to make sure everyone has a good time at the show, so leave everyday life behind and let him take you on an unforgettable musical journey. You will be amazed how a single musician can bring all your favourite songs to life and set the scene for the best night of your life!