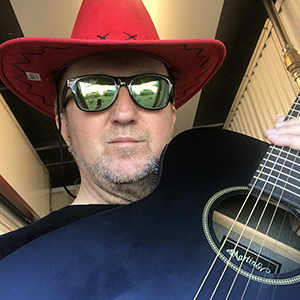 Adrian Myrth has traversed boundaries between root blues and flamenco with a brand new single " 2 Sonic Surprises " - Hard stage worker, Andy usually completes about 200 shows per year....Ever since mr Stephen Scooter Weintraub, the producer of Eric Clapton invited Adrian to be a guest at the show, it was obvious what makes Adrian exceptional as the music artist. He is one of the rare musicians who can turn Robert Johnson piece into a different tuning and music landscape, or combine flamenco, bossanova and jazz elements within one composition.. His playing inspired another celebrity performer, Dave Mathews. to borrow Adrians guitar for couple of songs and some jamming. New single HEAVEN CAN WAIT has just been promoted on the summer tour of Germany, Switzerland and Denmark....If you buy the latest DvD titled the same as the single - l You will also enjoy an extra interview material from "INIMITABLY YOURS" documentary - out on iTunes, Amazon.com, MTV, and soon live in your neighbourhood...The man you usually find at the guest lists of artists like Sherryll Crow, Dave Matthews, or John Williams - is coming out with the series of the most spectacular music shows in Copenhagen Downtown Venue . Stay tuned and stand in line for your tickets.